Lol-academy.net Review – Is it legit?

As my journey towards finding the best elo boosting website continued I turned my focus towards lolacademy.net a business that has had a presence in the scene for many years and which I believed would be reliable and professional.

In this review I will present major key points relevant to my experience with lolacademy and hopefully make your decision easier if you were considering hiring their service.

The website itself is extremely outdated and has that 2000s feel to it. I tend not to give too much importance to that but the packaging says a lot about the level of care and professionalism of the business. The dated design paired with slow loading and unintuitive interface does not make a good impression at all.

ue I had with the site was in the order area where you couldn’t order per division. You could only purchase wins or duos not complete division which was a first time for me. I never seen a similar service with only those order options and I don’t truly understand the reasoning behind it.

I wanted to ask the customer support about it but they were lacking a live customer support chat and the only thing you could do to is send a message to their email. I’ve sent several emails to them during my boosting process and I never got any message back from them.

he order would be assigned and completed shortly

Once I purchased I got redirected shortly to the members area where I filled in my data and began waiting for a booster. I could manually select a booster using an option from that area but the few boosters I messaged through their archaic chat option were busy even though they had the available status on 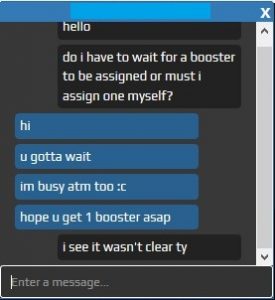 I waited for a couple of hours and I still didn’t get a booster assigned even after sending another email to their so called support about a status update.

I got bored just waiting around and since I was getting a bit tired I headed off to sleep thinking the order will be completed by the time I would wake up. That was not the case!

Once I woke up I was disappointed to say the least with the way the process unfolded. There were games played but no actual progress: 6 games played and 3 games won, so they made no progress in low elo for almost a full day.

Another thing that irritated me was the fact there were 4 different boosters who played games on my account and that was not only a problem from a security standpoint but also a testament to the skill and inefficiency of the boosters.

I messaged the customer support and again it was to no avail. At this point I was seriously considering refunding the purchase but as a last resort I messaged a couple more boosters using the “assign a booster option” and one of them felt bad for the quality of service I was receiving and actually started on my order.

He won all of the games I ordered shortly after and while his in game performance was not exactly challenger level I appreciated that he felt the need and responsibility to help me.

I will now summarize my experience with lolacademy in the following categories:

Performance – 2 out of 5 stars – I was extremely disappointed with the performance of the first 4 boosters but the last one was pretty good at least for silver/gold level.

Speed – 2 out of 5 stars – Their speed left much to be desired: the assignment, completion and the low amount of games played made a very poor impression.

Communication – 1 out of 5 stars – Lack of a live customer chat and any reply from my multiple emails outlinked a major gap in professionalism and accountability.

Price – 3 out of 5 stars – Their rates were just below market average which made sense considering they wouldn’t be in business otherwise.

In conclusion, I was extremely disappointed and irritated with Lolacademy. Everything from the outdated website to lack of division order options and live support chat made me consider refunding especially since no one reached back to me after multiple emails.

This was a major waste of time and money and a very frustrating experience, one that I can’t imagine recommending to anyone who is looking even for an average service.

I bought boost on Euw and my booster was fucking god 🙂

The quality of their services have gone down significantly. I made about 4-5 orders total. First 3 or so was good. Last one was slow, with questionable scores, and even an instance of the booster LEAVING the game, giving my account a leave penalty. The booster wasn’t even assigned to the order when that happened so no one knows which booster was responsible for that left game and the company started blaming it on me. Last order was absolute dogshit to the extreme. Bought 16 wins, about 11 of them were completed. Then nothing happened. Instead of the boosters actually finishing off the order, the booster started using my account to play custom games with their mates. What the fk? I reported this to the moderators, telling them I know it’s coming from their company seeing as how I changed my password, and updated that new password in my order and the custom games kept coming. Worst experience in the world. Order never ended up being finished either. Just gave up on this dogsht company afterwards. Clearly the mods don’t care enough to investigate and just push blame onto the customer. Waste of money and ended up damaging my account with the left game.

The quality of their services have gone down significantly. I made about 4-5 orders total. First 3 or so was good. Last one was slow, with questionable scores, and even an instance of the booster LEAVING the game, giving my account a leave penalty. T