Boostroyal.com Review – Is it legit?

In this review I will show you exactly what was my experience with eloboostroyal and why do I think you should avoid them if you’re looking for a reliable service provider in this field.I heard mixed opinions about the site for a while now and since I have employed the use of similar websites numerous times before I’ve decided to put their quality and value to the test. 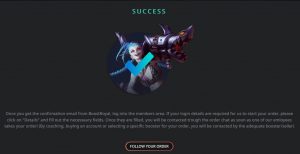 ing through the website I appreciated the speed and quality of the art and assets but I could also notice the level of clutter on the home  page and the very intrusive pop ups in the member area constantly asking me for a review in exchange of a discount on eventual future purchases so here they have it!I decided on my order and I messaged the support to have some of my questions answered but they weren’t replying and after 1 hour of waiting I’ve decided to go along with the order but downsized it considerably due to their unresponsiveness… a very wise decision in retrospect.

My order was assigned almost instantly, but they have a strange system in place where boosters can leave or take the order everytime they see fit and 2 initial boosters took and dropped my order for no reason at all until my final booster grabbed it and stuck with it even answering some of my questions since the support staff didn’t bother replying yet. 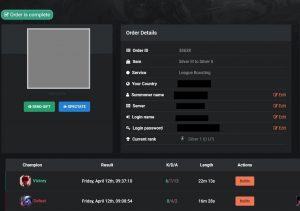 The booster was polite and professional, logging shortly after being assigned and I thought he would make quick work of the order and have it done in a couple of hours in a dominating manner.I was only partially right… his performance was lackluster to say the least.

I was not impressed from the very first match the booster went 3/3/3 on Kayle a game where  I actually spectated him and I quickly realized I’m not gonna learn anything useful from him so I stopped doing it after.

I understand that it was probably first game of the day “lag” and that we can all can have off games but he was advertised as a challenger player, so I expected him to shine in low silver and not get hard carried like he got by the mid and jungle.

I expressed my concerns to the customer support, who finally replied after more than 2 hours and after a bit more back and forth they made obvious to me that they only put emphasis on winning games above anything and high performance didn’t really matter 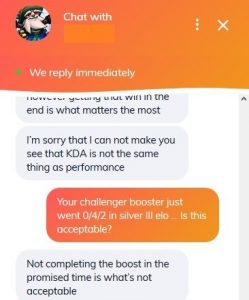 I agreed that winning is the most important thing but how is also significant especially since they advertise challenger players which should absolutely destroy every single silver game and not get carried by low elo players, that’s just wrong.

The booster had a couple of good games where he carried as expected, but then he had a horrible game where he went 0/4/2 where he got absolutely destroyed by silver players. I contacted the customer support in awe and they continued to defend him but this time told me they  were going to have a talk with him…They never replied back after and I didn’t insisted since the order was completed on the game and my felt my words falling on deaf ears.

I have classified the entire experience in the following categories:

–Speed  3 out of 5 stars – although their customer support contacted me a bit late, once I placed the order it was started fairly quick. 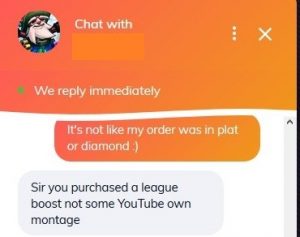 –Communication  2 out of 5 stars  their customer support was clearly defending their booster once I brought up their spotty performance which is commendable, but he also made some poor taste remarks such as stating that his booster wasn’t playing for youtube montages and that only thing that matter is winning games regardless of performance

In conclusion my experience with boostroyal.com wasn’t a pleasant one and left me with a sour taste in my mouth. I felt that I was not treated professionally and It was overall an underwhelming process which with my 2.5 average rating technically makes them mediocre at best, a service level I can’t possibly recommend.

i want a plat 4 to plat 3 duoq boost and i got 7 loses in a row. the players wasnt professional and never tryhard and they wasnt anythink higher than diamond 4-2 . very bad performances when i perform better than the booster and the enmies too

i want a plat 4 to plat 3 duoq boost and i got 7 loses in a row. the players wasnt professional and never tryhard and they wasnt anythink higher than diamond 4-2 . very bad performances when i perform better than the booster and the enmies too

Most basic boosting ever, not worth it for it’s money but at least you don’t get banned like on eb24