GGboost.com Review – Is it legit?

In my journey of finding the best league of legends boosting site GGboost was next in line to have its business tested rigorously and be given a fitting rating.

In this review I will talk everything GGBOOST related as i personally experienced it recently. From their pros and cons to their value (or lack of it), this information should make your decision of choosing or not their service very clear. 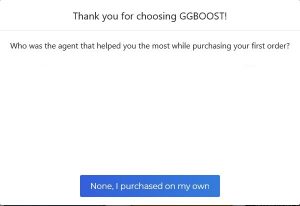 Starting with the website GGBOOST didn’t make a good impression, they lacked a buy button and their buggy assets wouldn’t even allow me to see how much it would cost to purchase my desired order.

I had to contact the support and have him help solve the issues, and after a few refreshes I was able to see their prices that made me already skeptical about the website since it was a very big issue one wouldn’t expect from a website like that who is fairly popular.

Shortly after placing my order I got redirected in a less than optimal way to my member area where I had to insert all of my settings and preferences.

After that I was quickly assigned a booster and the speed of the process made me be a bit more optimistic towards the process. In the member area there also was a slight inconvenience: the booster chat message alert was extremely loud and with no button to mute the sound and I had to turn off the page sound.

I asked the booster a couple of questions one of which was if there was a possibility to spectate him using that option from the member area he said that I could indeed do it, but I soon discovered that was not the case.Their replay button was not properly integrated and I couldn’t actually use it.

I asked the customer support for assistance again, and they sent me straight to op.gg which let me think they were used to customers inquiring about their faulty spectate service.

The booster performance was decent he had high kda, and he was mostly quick in answering and being available for questions but after a few games he actually asked me if I would consider purchasing more after my order will be done which caught me by surprise since no one actually pressured me in buying future boosts like that and I felt it was of poor taste.

Not too long after the server went down due to major patch content update and the order was to be paused and resumed later on. 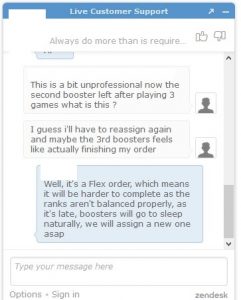 The booster told me he would start later in the day which is understandable since he was probably going to sleep.

Later during the evening I messaged him, and he said he was going to start soon but two hours past after, and he didn’t say anything or resume playing and ignored my messages which I found unprofessional.

I would have been ok if he had said something or give me an estimate timeline, but he said soon and then afk’d which prompted me to reassign to a new booster.

That process was actually pretty straightforward and quick, I just had to pause the order and then press the reassign button and a new booster messaged me shortly after assuring me that he was gonna start right away.

The new booster got assigned and started playing almost instantly which I appreciated but then again after 3 games  (1 particularly bad one) he stop replying and disconnected.

The 3rd booster finally managed to complete my order and I was happy it was finished. It just was disappointing it took 3 boosters to get 1 division finished…

I will now rate my overall experience in the following categories:

Performance – 3 out of 5 stars – They won most games but one of the boosters hard fed in one of them and I wasn’t particularly impressed with their skill.

Speed – 1 out of 5 stars – Not only they took so much more than 24 hours for a lower elo order they also swapped boosters 2 times and made me lose so much  time.

Communication – 2 out of 5 stars – I appreciated the speed of the customer support but there were some features that didn’t work as planned, and he couldn’t help much, meanwhile  the boosters were very unprofessional while communicating with me (asking for more orders from me and replying in a immature manner).

Price – 2 out of 5 stars – The rates were not much higher than you would expect from this kind of service, but given the fact the entire service experience was so low quality I can’t see how they could ask for that.

Overall I was very dissatisfied with the entire GGBOOST service, from their buggy purchase area to their unprofessional boosters to requiring them 3 boosters to finish 1 low division in more than 24 hours I almost went ahead and refunded but their fast customer support made me stick around more.

Without a doubt I’m not gonna make the mistake of hiring them again and I can’t recommend it to anyone who is looking for a fast and professional boosting service.

AVOID! They hire every random flaming bronze player who runs scripts and as long as they get your money they don’t care.

1st booster felt like a plat player trying to carry gold. We won 2 and lost 3 and he did very little. Next booster was much better but after a few games, he was unavailable for the next 3 days and eventually told me he was super busy and I should ask for a new booster.

Next booster played one game and then quit, and it wasn’t because of me. We had an afk jungler and ADC who was inting. After the game, the booster said, “that’s frustrating, gl in your games” and logged off. I’m now working with booster #5 and still only half way through the order.

1st booster felt like a plat player trying to carry gold. We won 2 and lost 3 and he did very little. Next booster was much better but after a few games, he was unavailable for the next 3 days and eventually told me he was super busy and I should ask

I have an open dispute with my bank about this service.
I purchased a p2-d4 order on 9/8/20, I did not receive service until 9/11/20. After I did get someone, we played a total of 16 games and I am now demoted. I have on my own solo queue experience a 65% win rate ranked but after a couple of games I rage bought a service from here. After those 16 games I am now at a 58% win rate and demoted from p2 to p3. The service provider left the order because he said he felt at fault for the service and I requested a refund and was told NO REFUNDS. I opened a dispute with my bank because I believe this is a fraudulent website that is false advertising “smurfs” and will come back here with a follow up.

I have an open dispute with my bank about this service.
I purchased a p2-d4 order on 9/8/20, I did not receive service until 9/11/20. After I did get someone, we played a total of 16 games and I am now demoted. I have on my own solo queue experience

I’ve been a customer of your services since 2017.
I’ve recommended and even bought services for my friends since i started.

Right now, you’re applying over-prices in boosting comparing to other companies,
SO, the customer expects the best service and booster.
Simple math.

Now to the point:
I’ve manually leveled up a new account to level 30. Took me 3 weeks.
I wanted the first 10 games to win successfully with good winrate and kdas, so,
i bought a boost in your company.
I did 6 games, in which i lost 3, and the ones i won, is because i legit carried the booster.
I’ve been matched up 2 boosters so far in this order, and i’ve been speaking with Dopa*.
One game he goes 2/9, another one he starts 0/3, etc.
We’re talking in unranked accs, so high gold max.

My point here is, a person wastes LOT of time and MONEY to create an account.
Then hires your services because he wants a kick-ass start in the account.
That doesn’t happen.
So weeks and money you’ve spent in high expectations of that account are lost.
Excuse me, but, if its a master+ tier booster as you claim they are, ITS IMPOSSIBLE HAVE THIS PERFORMANCE.

Right, now about the costumer service.
As i said before, high price, high service, high expectation from costumer.
I’ve been talking to Dopa and he’s been kinda rude, starting conversation as “i dont give a **** about what other companies do”, etc.
All he does is swap booster, and he isn’t even able to say “I understand ur frustation sir”, which is a basic line when we’re leading with costumers.

And thats it.
I’m very dissapointed with your services, this was the worst 50€ that i’ve spent ever, far away from my expactations.

Sorry about my english, its not my main language.
Hope my words have some sort of impact in your company

I’ve been a customer of your services since 2017.
I’ve recommended and even bought services for my friends since i started.
Right now, you’re applying over-prices in boosting comparing to other companies,
SO, the customer expects th