Eloboosta.com Review – Is it legit?

Going through the journey of finding the best elo boosting service I set my sight over a relatively new but popular website eloboosta.com.

In this review I will walk you step by step through my experience with eloboosta.com and give you my thoughts in the case you were considering hiring their service. Spoiler: Don’t!

The website assets and the overall feel of it was very underwhelming and unpolished which was a sign of unprofessionalism and lack of caring from the creators. 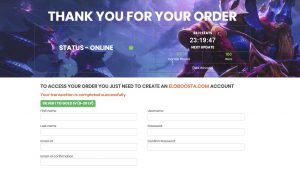 After browsing a bit more I decided on my boost and like always when I’m at this point in the process I always contact the customer service to ask a few questions and get a better understanding of what kind of service provider I’m employing.

To my shock they had no customer support chat and the only way for me to contact a staff member would be by sending an email and waiting (as mentioned) 1-12 hours for someone to get back at me.I wasn’t willing to risk wasting so much time waiting for their email, so I went ahead and ordered anyways but a lower elo order just in case.After purchasing, I got first redirected to a page where I had to introduce all my data and then eventually to the member’s area.

I purchased similar services from numerous websites and I can safely say that this was one of the most basic and unattractive member areas I’ve seen and that comes from someone who appreciates the minimalist approach.

A booster was assigned to me in a fairly reasonable timeline, but they messaged me that they would start my order only in the morning.

I felt a bit let down and confused as in why would they take my order but not start right away? Surely there wasn’t only one boosters working there and one of them could play right away…

I went ahead and went to sleep thinking by the time I would wake up the booster would already made some progress. I was wrong the booster didn’t start in the morning like he said instead I had to actually message him past noon and ask for an update because I was seriously considering a refund…

His performance was mediocre to say the least considering it was high silver low gold.  I expected way more from an advertised challenger booster. He clearly was not that and if I would guess he would be around mid plat-low diamond max – I’ve seen plenty of boosters in action and im confident on making that educated guess.

I asked him a question about a champion he was playing and given his slow response time and fairly low performance I just waited for him to be done with the boost so I could move on. 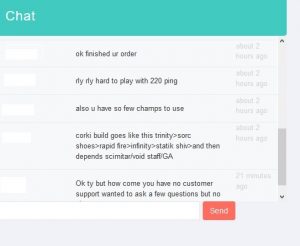 The order was completed that day which given his performance I doubted he could pull off but he did it even though he had a few losses and subpar games.

Later on he tried to justify it by saying he was lagging and and that I had very few champions to play with.

I will now rate my entire experience with eloboosta in the following categories:

Performance – 2 out of 5 stars – The booster won most games but the ones he did lost he performed pretty poorly and definitely got carried in others. I’ve seen worse, and I was not impressed at all

Speed – 2 out of 5 stars- Not only did the booster not start right after assignment, but they further delayed it and only did so when pushed by my messages, it was completed that day but not in a very fast manner

Communication – 1 out of 5 stars – If I could I would give them 0 stars since they lacked customer support chat entirely and the booster was very slow in writing or keeping to his word.

Price – 3 out of 5 stars – The rates are similar with other services in the market but t after I felt they were overpriced considering the quality level of the entire experience.

In conclusion I was disappointed with the service quality of eloboosta; their overly simplistic, low effort website paired with the lack of a customer support chat. The mediocre/unprofessional booster made for a very unpleasant experience one that I can’t possibly recommend to anyone.